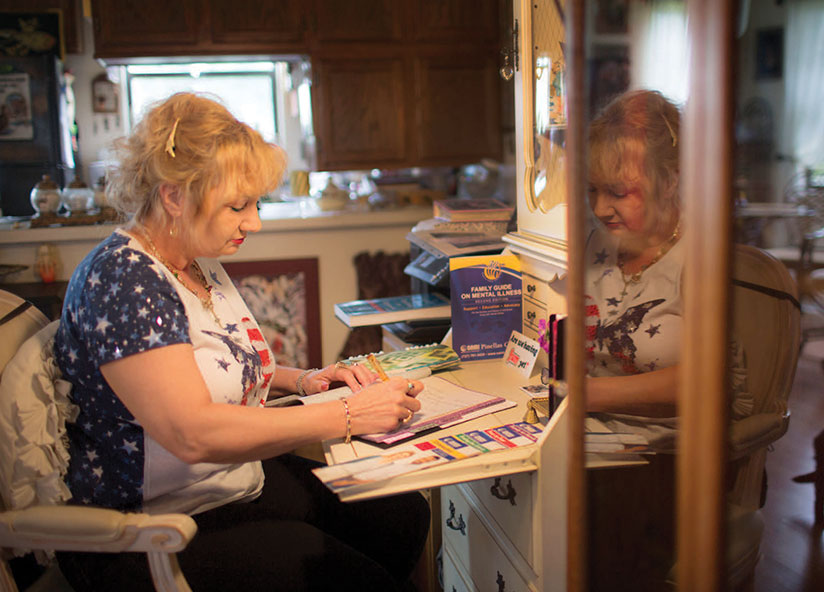 Post-traumatic stress disorder (PTSD), a mental health disorder that can result from experiencing or witnessing a traumatic event, is most often associated with combat and war zones. But for many of the estimated 8 million adults in the U.S. living with PTSD, the trauma that triggered the illness occurred right here at home.

This image: Terry Taggart works at a desk in her home.

When Camila* was in her early 20s, she was held hostage with her 5-year-old daughter and raped. Her suffering did not end there. Years later, when Camila was pregnant with her second child, she experienced recurrent nightmares, had trouble sleeping and concentrating, and faced emotional numbness — all common symptoms of PTSD.

Across an array of circumstances, experiences of trauma are alarmingly common in the U.S. — whether related to singular personal events such as a car accident; large-scale events such as a natural disaster or, more recently, the COVID-19 crisis; or chronic public-health threats such as exposure to gun violence.

The problem of PTSD is particularly pervasive in America’s most economically distressed communities, where exposure to violence and struggles with food insecurity, evictions and racism can have a devastating toll.

“Poverty in a sense is a form of a chronic traumatic experience or stress,” explains Lisa Meredith, a senior behavioral scientist and professor at Pardee RAND Graduate School in Santa Monica, California. Meredith led a study, published in the Journal of General Internal Medicine in 2016, that investigated PTSD treatment in community health centers serving low-income patients. In the study of 404 participants, the researchers found that as many as 89% had experienced three or more traumatic events. In a 2016 study published in the Journal of Racial and Ethnic Health Disparities, 36% of women in a disadvantaged Chicago neighborhood were found to have PTSD or subthreshold PTSD. Whenever an individual’s physical safety day to day is uncertain, there is greater susceptibility to PTSD, says Jessica Umbrell, PhD, senior psychologist advisor at PerformCare, a behavioral health organization within the AmeriHealth Caritas Family of Companies.

And yet people living in poverty are also less likely to have their PTSD symptoms diagnosed or receive treatment, especially in underserved neighborhoods and rural areas where access to care is limited.

Obtaining treatment, such as medications or psychotherapy, can also be thwarted by the many more pressing challenges that people living in poverty often face. For example, Camila, who was part of the study of low-income patients led by Meredith, had recently quit college to work full time in order to support her coming baby, was in search of new housing, and feared that a mental health diagnosis could affect custody of her children.

“We found that it was difficult to engage patients with care,” Meredith says. “The host of other needs — like housing problems or getting legal services — make it difficult to focus only on the PTSD.” 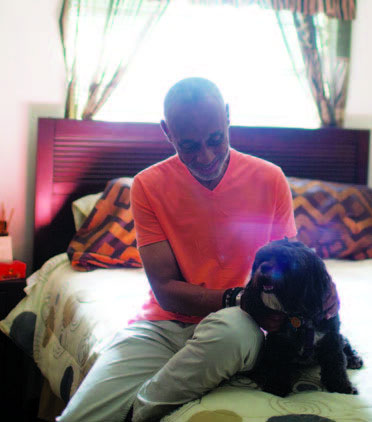 Thomas Wilkins, who lives with PTSD, sits on his bed with his dog, Apollo.

Victims of natural disasters are often left with lasting trauma — long after order appears to have been restored.

When a natural disaster strikes, the top priority is to provide those affected with physical aid, such as safe shelter, medical care and food supplies. But survivors of natural disasters often also suffer from a less visible challenge: emotional trauma. As many as 40% of victims of disasters exhibit signs of PTSD, according to the Association of Schools and Programs of Public Health.

Prioritizing mental health care after such events is critical — especially considering the rising rate of natural disasters in the U.S. According to The National Centers for Environmental Information, between 1980 and 2018, an average of 6.3 major weather and climate disaster events occurred each year, but from 2014 to 2018, the annual average was 12.6 such events.

"Because the exposure to these kinds of events has increased over time, I worry about increased rates of PTSD," says Lisa Meredith, a senior behavioral scientist and professor at Pardee RAND Graduate School in Santa Monica, California.

Teletherapy can be useful for reaching patients in rural communities affected by PTSD who may live far from a mental health provider, and it has proved a vital link even in nonrural areas for patients and providers observing stay-at-home orders during the COVID-19 pandemic. Further, telehealth can help address a national shortage of psychiatrists, says Dr. Israel Liberzon, head of the department of psychiatry at the College of Medicine at Texas A&M University in Bryan, Texas. "Having face-to-face meetings is easier for the patient and the doctor, but absent that, telehealth can be very effective," he says.

Left untreated, PTSD symptoms can resurface years after a natural disaster. In New Orleans, for example, Meredith says many residents are still haunted by Hurricane Katrina nearly 15 years after the storm struck. It doesn’t help that there are visible signs of Katrina still present in the city’s poorest neighborhoods, such as unrepaired buildings. "Katrina has communities walking on eggshells every time there is another storm," she says.

PTSD manifests in varying degrees of severity and can wax or wane over time, depending on life circumstances. The disorder can lead to outbursts of behavior, prevent people from functioning at work, cause them to lose ties with family and close friends, and lead to substance misuse and addiction. Research has even linked PTSD to the development of violence among juvenile offenders and to high rates of premature births among African American women. 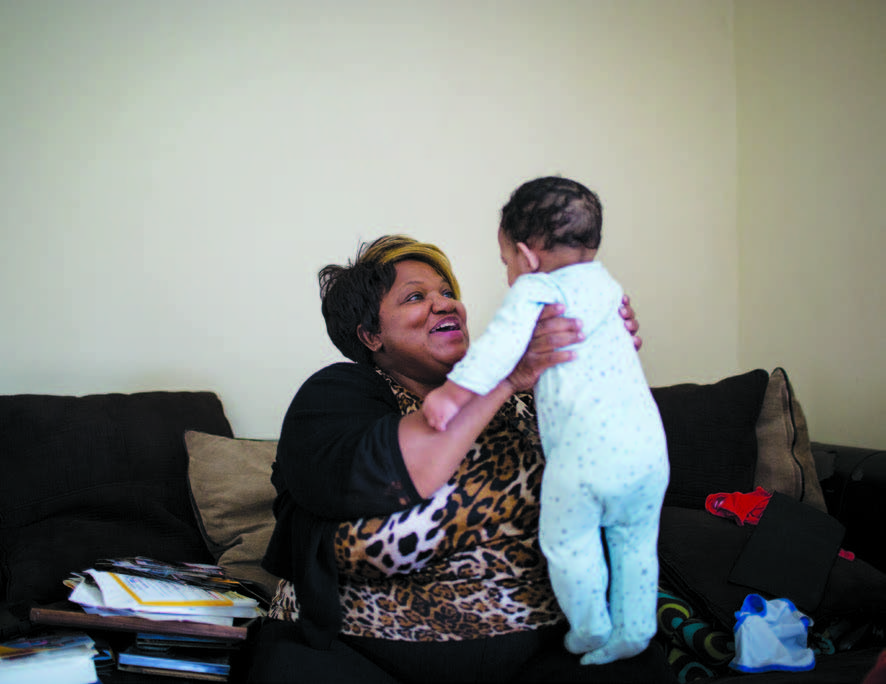 Diagnosing PTSD in the first place can be challenging. While primary care clinics are well-versed in screening for mental health challenges such as depression, patients are not routinely asked about their exposure to trauma. Patients also might be hesitant to proactively discuss traumatic experiences due to stigma associated with the disorder and with incidents such as sexual abuse. And PTSD itself can be debilitating, making it difficult for individuals to navigate everyday situations such as grocery shopping — let alone ask for help.

"As with any psychiatric condition, more people walk around undiagnosed [with PTSD] than those who get treatment," says Dr. Israel Liberzon, who heads the department of psychiatry at Texas A&M University’s College of Medicine in Bryan, Texas. "People suffer, but they do not necessarily cross the border of dysfunctionality. They can go for a long time undetected."

As such, some experts, including Dr. Umbrell, now advocate for an approach known as trauma-informed care, which takes the assumption that any given patient may have experienced trauma and calls for providers to act accordingly. "It’s really important to recognize that a large majority of people have experienced some type of trauma," she says.

Primary care physicians, who are often a patient’s first point of contact after experiencing trauma, should note symptoms such as nightmares that can be normal immediately following a traumatic event — but problematic if they linger, Dr. Liberzon says.

"PTSD is the failure to recover. If people’s overall function deteriorates, that’s a sign that maybe PTSD has developed," he says. "Primary care providers have to be sensitive to that and, when they detect it, direct people to appropriate care."

There are a number of evidence-based therapies that can effectively treat PTSD. Medication can help address depression and anxiety, while psychotherapy can help patients gain control of the trauma. One common method is exposure therapy, a relatively intensive process that involves reexposing the patient to trauma-related memories or cues so they can confront them. The therapy typically takes place over 12 sessions. Because it can be difficult both to devote time to the sessions and to undergo the treatment emotionally, dropout rates are high. 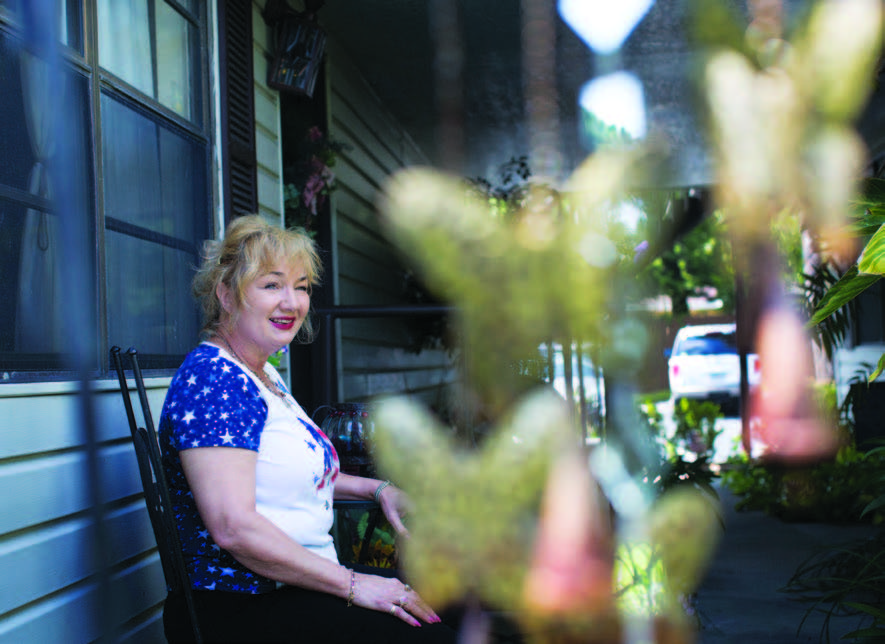 Terry Taggart lives with PTSD and devotes her time to mental health advocacy and her dog grooming business.

Other options include cognitive processing therapy (a form of talk therapy that helps patients reframe negative thoughts) and written exposure therapy, which can be less intense and time-consuming. A nontraditional treatment is called eye movement desensitization and reprocessing, which combines exposure therapy with rhythmic eye movements. While this method of therapy has shown promise, few providers are trained to administer it.

"When it comes to treatment, you have to go to not just any doctor but a psychiatrist or psychologist who understands and knows how to treat PTSD," Dr. Liberzon says. It can be especially difficult for people living in poverty to obtain such specialized care. Few federally qualified health centers have psychiatrists on-site, and social workers often have large caseloads that prevent them from providing intensive care.

But more informal community support can also help in addressing PTSD, says Daniel Weiss, PhD, a professor of psychiatry in the School of Medicine at the University of California, San Francisco. "The most important thing that you can do for anybody who is traumatized is to get them into a safe community," he says. "Having a strong sense of community builds power, and the hallmark of trauma is powerlessness."

In that sense, rural areas where communities may be more tight-knit can be at an advantage when it comes to healing trauma, Dr. Weiss notes.

Similarly, Meredith's research has led her to collaborative care — a common model for addressing conditions like diabetes and depression — as a way to effectively monitor and treat PTSD in vulnerable communities. In this approach, a care coordinator, such as a nurse, manages a group of patients and communicates with their primary care providers and behavioral health providers, tracking symptoms and progress toward treatment goals. "It's the gold standard for primary care management of common chronic illnesses," she says.

One challenge in implementing collaborative care has been making it reimbursable through state Medicaid programs, which Meredith says is now starting to happen.

"Generally, you can only bill for care from an individual provider, and not from a program of care," she says. "So it's really changing the traditional mindset of how care is reimbursed."

In the case of PTSD, changing mindsets will need to go beyond billing. Helping all providers, patients and the general public understand the scope and extent of the disorder — particularly among communities repeatedly exposed to trauma — is essential to tackling the silent crisis plaguing American's poorest communities.