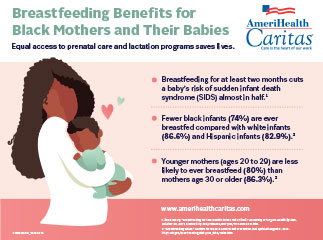 The United States is one of the most dangerous places in the developed world for a black woman giving birth and for black infants in their first year of life.1

Despite the news, there is a healthy, cost-effective strategy to help reduce infant mortality: Breastfeeding.

Dr. Lenaye Lawyer, an OB-GYN and a market chief medical officer for AmeriHealth Caritas, a national leader in Medicaid managed care, said there should be greater awareness of the importance of raising the low black breastfeeding rate. According to the Centers for Disease Control and Prevention (CDC), black infants are 13 percent less likely to be breastfed than white infants.3

“There are many factors that contribute to the low black breastfeeding rate,” Dr. Lawyer said. “We have to help ensure that hospitals and health clinics in minority communities have breastfeeding and lactation resources and information. And, we have to work with our community partners to remove the stigma of breastfeeding.”

The CDC’s Maternity Practices in Infant Nutrition and Care (mPINC) survey found that hospitals and health clinics in communities with more than a 12.2 percent black population were less likely to be supportive of breastfeeding.4

An international study found that breastfeeding for at least two months cuts a baby’s risk of Sudden Infant Death Syndrome (SIDS) almost in half, and the longer babies are breastfed, the greater the protection.6 Breast milk is good nutrition for a baby, providing all the proteins, fats, vitamins, minerals, and enzymes that a young body needs to stay healthy.7

Infants who are breastfed have a lower risk of developing asthma, Type 2 diabetes, eczema, and obesity.8 For premature infants, breast milk can be lifesaving, according to the American Academy of Pediatrics. The organization recommends that infants be exclusively breastfed for about the first six months with continued breastfeeding alongside introduction of complementary food for at least one year.