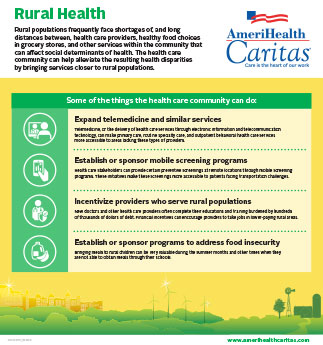 Health disparities are often associated with race, ethnicity, and income. But the 60 million Americans who, according to the United States Census Bureau, live in rural areas1 face unique health care disparities of their own. These disparities must also be addressed to improve the quality of care and achieve health equity for rural populations.

Dr. Andrea Gelzer, senior vice president of medical affairs for AmeriHealth Caritas, a national leader in health care solutions for those most in need, notes rural populations face barriers to good health, including:

“The health disparities that we see in rural areas are worsened by the lack of easy access to health care and social services,” said Dr. Gelzer. “While the shortage of and distances between some primary and specialty care providers particularly stand out, rural populations also frequently face a lack of healthy food choices in grocery stores and other resources within a community that can affect social determinants of health.”

Dr. Gelzer says the health care community can help alleviate some of the resulting health disparities by bringing services closer to rural populations.

Some of the things that health plans, providers, government bodies, and/or community organizations can do include: